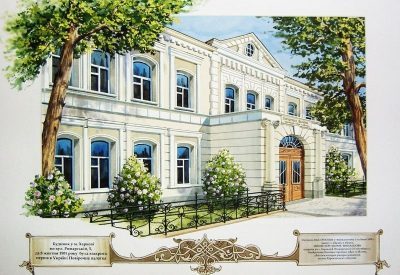 SE “Kharkivstandartmetrologiya” takes its history from the Kharkiv Calibration Chamber of Trade Weights and Measures, opened in October 8, 1901 in Kharkov at the initiative of the head of the General Chamber of Weights and Measures of the Russian Empire, a prominent chemist D.I. Mendeleev, who dedicated the last 15 years of his life in metrology and the creation of the metrological service of the country. The activities of the Kharkiv Calibration Tent extended to Kharkiv, Poltava, Kursk, and since 1906 to the Voronezh province.

Since 1901, for two decades, the activities of the Kharkiv Calibration Tent have consisted mainly of checking and branding simple trade measures and scales, the number of which has been growing from year to year. Only three employees worked in the tent, including the tent manager.

An outstanding event in the formation of the state metrological system of the USSR was the adoption in August 30, 1922 by the All-Ukrainian Central Executive Committee “Regulations on the Ukrainian Main Chamber of Weights and Measures and its local bodies”, which marked the beginning of main chamber of weights and measures, which, in addition to purely practical metrology, namely – calibration work, begins the development of scientific metrology in the USSR. It subordinated the inspection tents of all regions of Ukraine, and the head of the Kharkiv Calibration Tent had the status of Deputy Head of Calibration Weights and Measures, retaining his previous position.

Prior to the Great Patriotic War, KSIWMI ‘s efforts were aimed primarily at increasing the importance of measurements in the country as a whole and in the Kharkiv region in particular. The war set KSIWMI new tasks – to provide defense companies with maximum assistance in establishing their measuring economy, which became important in wartime. In order to widely expand the production of military equipment and ammunition manufactured at high accuracy classes to ensure their unconditional interchangeability, a large number of enterprises that had non-military specialization and produced civilian products before the war, KSIWMI in the shortest possible time organized metrological support high-tech level, trained the necessary personnel.

On September 22, 1941, KSIWMI ceased its activities and began preparing for the evacuation. Especially valuable equipment was sent to Tomsk, other property and materials that could not be evacuated were destroyed.

KSIWMI resumed its activities on September 1, 1943 after the liberation of Kharkiv from Nazi invaders. 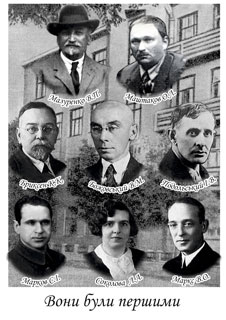 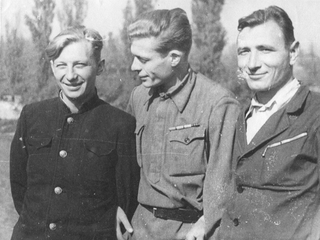 In the year of its half-century (since the establishment of the Kharkiv Calibration Tent) anniversary, KSIWMI has fully resumed its pre-war work.

In 1967, KSIWMI was renamed the Kharkiv State Research Institute of Metrology (KSRIM). Laboratories, which carried out state verification and audit of measures and measuring instruments, control over compliance with standards and technical conditions in industry, formed the inspection part of the institute. Research has been focused on three areas: mechanical, thermal and electrical measurements.

In 1979, in order to improve the structure of the metrological system of the State Standard of the USSR, the Department of State Supervision of the KSRIM, which performed work on practical metrology, including verification of measuring equipment, was reorganized into a separate organization – Kharkiv Center for Standardization and Metrology (KCSM).

On January 1, 1981, as part of the reorganization of the entire system of the USSR State Standard and its departments, the Metrology Research and Production Association (NGO) was established in Kharkiv, which included: KSRIM, KCSM, Special Design Bureau and Kharkiv Research and Experimental Plant “Etalon”. KCSM had a dual subordination – NGO “Metrology” and directly to the State Standard of the USSR.

On December 28, 1988, the KCSM was removed from the Metrology NGO and became subordinated to the Ukrainian Republican Department of the USSR State Standard, which was transformed into the USSR State Committee for Standardization, Metrology and Product Quality by a Resolution of the Cabinet of Ministers of the USSR on May 24, 1991.

According to the Decree of the President of Ukraine of October 1, 2002, the State Standard of Ukraine was reformed, as a result of which it was transformed into the State Committee of Ukraine for Technical Regulation and Consumer Policy (The State Service of Ukraine on Food Safety and Consumer Protection of Ukraine) with a special status. This Decree set new requirements for the implementation of state policy in the field of consumer protection, as well as interpectoral coordination and functional regulation of standardization, metrology, certification and quality management.

In December 2003, the State Enterprise Prylad was incorporated into the KSCSMC, and the center was renamed the Kharkiv Regional Center for Standardization, Metrology and Certification, or “Kharkivstandartmetrologiya”. 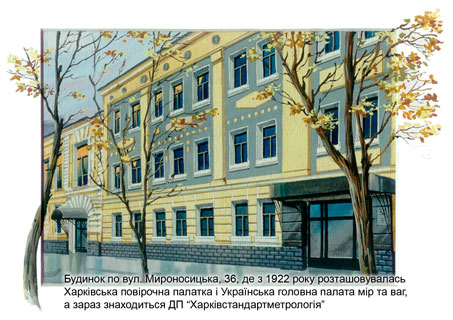 The State Enterprise “Kharkivstandartmetrologiya” consists of 29 divisions, including 2 testing laboratories accredited to the competence of the National Accreditation Agency of Ukraine.

Today the center includes 365 of employees:

• 7 auditors for conformity assessment of products according to technical regulations.

Since December 2011, “Kharkivstandartmetrologiya” has been subordinated to the Ministry of Economic Development and Trade of Ukraine.

The scientific and technical potential of “Kharkivstandartmetrologiya” allows to perform works related to metrology, standardization and confirmation of conformity at a high quality level. Departments of the center are equipped with modern equipment and measuring equipment.

Today “Kharkivstandartmetrologiya” is the leading research and production center of Ukraine in the field of metrology, standardization and confirmation of conformity.